Highland Games - Our Top Tips for a Great Day Out

We’re spoilt for entertainment in August.  Visitors from across the globe flock to Edinburgh for the Fringe Festival, the largest arts festival in the world.  But, there’s plenty of entertainment all over Scotland that gets right to the heart of the Scottish culture.  We’re talking about the Highland Games held all over the country in some of the most idyllic settings.

Visiting a Highland Games ensures you’ll join in the true spirit of Scotland. They’ll be sporting spectacles, including the “heavy events”; the caber toss, shot put, tug-o-war and hammer throw.

A full length tree trunk, usually Scots pine, is lifted and thrown into the air so that it flips mid-air and lands on its top end. A straight landing gets more marks!

A sport where passions run high!  Teams of eight try and pull each other across the line. You’ll know when the Tug o’War is starting from the noise of the crowds! Not to be missed. 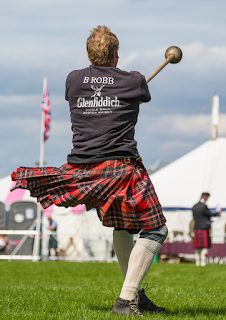 A large metal ball is whirled round the head and thrown as far as they can.

Then, of course, there are the bagpipes, kilts, dancing and whisky, all of which feature heavily at any self-respecting Highland Games gathering.

Photos thanks to Visit Scotland
Posted by Scottish Independent Hostels at August 01, 2019