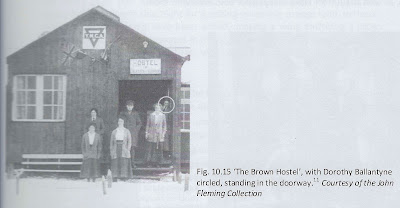 Established in 1916 by the Y.M.C.A, alongside others close to field hospitals, at Camiers close to Etaples in northern France, the Brown Hostel  offered, free of charge, crucial support to families visiting wounded soldiers.

My wife’s grandmother, Dorothy Ballantyne, then aged 19, her mother, Maud Ballantyne, nee Brown and her aunt, Alice Brown always known as Aunty ‘Ish’ were the mainstay of this hostel named after a member of the family who had donated heavily to see it established.

Dorothy Ballantyne, imagine it, aged just 19 years, drove whatever vehicle was available, usually a Red Cross ambulance or car from the port of Boulogne bringing to the hostel anxious visiting relatives and, in the opposite direction  wounded soldiers discharged and delighted to be on their way home to Blighty.


Families were cared for at Browns

An estimated figure of 135,000 soldiers serving in Scottish regiments were lost in the carnage of the First World War. We know that more than a few of their families were cared for at Browns and other hostels alongside a formidable number from all over Great Britain and the Empire.

From ‘The Watchers’ by Emily Huntley, a family friend who came to help:-

“In the middle of the camp beneath the hill stands a long brown wooden hut with many windows and a friendly little porch.  Its garden boasts a tiny lawn made of sods cut from the hill and fashioned with infinite labour by a soldier-gardener.  Mignonette and pansy and cornflower - and beans and lettuces and cabbages - make it a garden to rejoice the heart of every lad who passes by.

Over the porchway is the well known sign of the Red Triangle.  It is the Y.M.C.A Hostel where the relatives of the dangerously wounded are cared for during their sorrowful sojurn.  Peep in at the doorway which opens directly from the porch.  The carpet is bright and cheery, basket chairs give welcome to tired travellers, on the wooden walls are pictures collected from many sources, books, magazines, papers are there; the little writing table by the window is rarely empty.  There are flowers too – sweet wild flowers from the hills and tributes from the cottage gardens near; and if flowers are scarce there are leaf sprays and bits of evergreen …

Everybody there becomes somebody’s helper.

Breakfast time brings all together – only there are gaps for those whose vigil is not yet over.  The Lady of the Hostel gives thanks for the daily blessing.  Some troubles are softened by the companionship of the table.  In a mysterious way everybody there becomes somebody’s helper, and from either end of the table turns are skilfully given to the conversation that help to lift the burden …

Slowly they come; evening passes to night and the inevitable trail goes on.

Then comes the day of booming guns – a sultry day, as though the very winds of heaven held their breath at the sound.  It is evening time and from the hostel doorway we watch the long slow procession of ambulance waggons bringing in the stricken gleanings of the field.  Slowly they come; evening passes to night and the inevitable trail goes on …

Then the doctor counts the chances of life and death - and across sea and land his message speeds calling kith and kin to the side of the lad whom death looks in the face.

“Regret to say your son dangerously wounded in hospital at X … He may be visited.  If unable to bear the expense, a permit will be granted …”

So the tide ebbs and flows and the little band of hostel workers feels the mighty rhythm that bears cottage - heart and palace - heart on its bosom.  One secret of the message of the hostel is that the tide has swept into the hostel itself.  It has borne away with its loved brother, a husband, many dear friends.  And ever as it flows again, to the lips of each springs the question, “Is it well with the lad?”