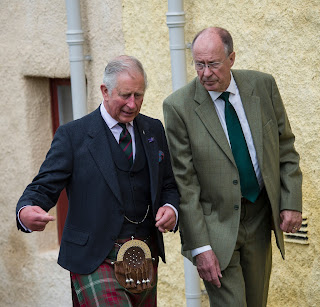 Portsoy and district turned out in the wet to welcome Prince Charles who was taken around the restored buildings, now superbly equipped and ready to go as one of the latest SIH member hostels and introduced by PCE co Chairman, 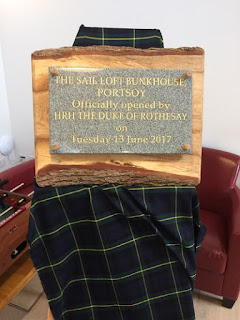 Roger Goodyear to the fifty two guests, all of whom had a hand in progressing the project.

Former SIH Chairman, David Dean of the Lazy Duck Hostel, Nethy Bridge and his wife Valery, having advised on the project throughout, were in the line up to meet the Prince.

David said, "The whole team have been just so focussed on opening this hostel.  The interest it has generated and the opportunities it offers to both individual travellers, families and to the groups of young people engaging in the several boat building and other sea going activities which will be run from here are very great indeed.  It has been a joy to be advising Roger, Paul Higginson of the NESPT, Tom Duff, architect and to have played a very small part in contributing to their thinking." 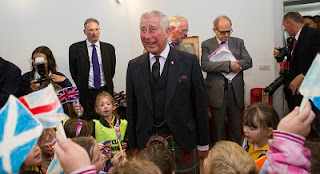 With the worst flooding in Portsoy anyone can remember, taking away the road to the hostel and surrounding the building by fast flowing water only one week before the opening,  it was a miracle and a tribute to the team and many volunteers that the opening was made possible at all.

The new Sail Loft Bunkhouse has a fabulous coastal location overlooking the beach and out to sea in the picturesque north east town of Portsoy. 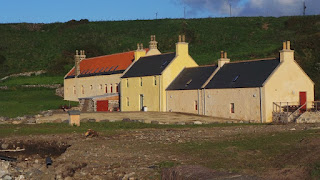 The bunkhouse provides accommodation for 25 guests across a variety of rooms including bunk dorms, twin and family rooms.  It offers a modern open plan shared kitchen, dining area and lounge with wood burner and shower facilities with plenty hot water.

It is within easy walking distance of the picturesque historic harbour and the town of Portsoy which offers good amenities and also where the acclaimed Scottish Traditional Boat Festival takes place in late June/early July each year. 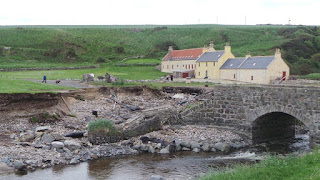 North East Scotland Preservation Trust managed the conversion of the Bunkhouse from a group of traditional near-derelict former sail loft buildings and cottages, retaining their original charm while upgrading the buildings to a high quality modern use.

The Banffshire coast is known as Scotland’s Dolphin Coast and Portsoy is the perfect base for exploring this glorious part of Scotland and its natural and historic environment. Portsoy is just 10 minutes’ drive from the eastern end of the Moray Coast Trail at Cullen.