Sunday morning here and the weekend crowd is dwindling to the last remnant hostellers, hesitant to leave in case they miss something yet at the same time keen to get on a hill on their way home.  For those from Aberdeen meeting up with a distant friend from the south the Friday evening squeals and hugs were repeated today as each prepared to return to their own.  It's that coming together aspect of hostel living whether from a busy working home where family members feel sometimes that they are ships passing in the night or from geographically far flung friends coming together for a treasured re union that is so typical.  The hostel therefore bears the responsibility of facilitating, as best it can, these happenings.

I suppose the only times we struggle is where he or she who booked has not thought to share a hostel's essential information, usually to be found on their website, with other members of the party.  Whether it's the smoking issue or ensuring consideration for guests in nearby accommodations or indeed anything else in each hostel's arrangements designed to promote harmony and a good time to be had by all, he or she who booked, and therefore takes responsibility for the sharing of essential information, can so easily drop the hostel in it with the rest of the group.

Thank goodness this unenviable position is a rarity for hostel keepers and their staff to deal with.  At least it is for us and I hope for others too.  As summer is moving to early autumn we can look back on so many different gatherings and happenings from honeymooners to veterans' gatherings, small groups stealing out in the dawn with long lensed cameras to capture the deer and her fawn, feverishly flying swallows racing against time to rear their young or the pair of crossbills who have taken a liking to surveying the scene below from one of our nearby pines.  Then there have been the hardy ones, Duke of Edinburgh Gold Award kayakers  en route for the point where our substantial river meets the sea, mountain bikers, Silver Boot long distance horse riders, zip wire flyers, tubing enthusiasts and more.  The convivial gatherings round the sitooterie open fire is oh such a good way to bring their day to its close. 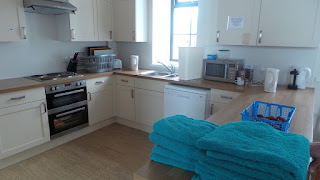 I have said before that hostel keepers are quite likely to have a second occupation.  Many are providing activity courses or experiences.  Others have a second and vital income from a variety of unimaginable sources.  How, for instance, do you fit running a four en-suite room hostel on a small Orkney island with providing 'patient and friendly learner driver tuition'   Well that's what it says on Richard Seeber's business card and the day after we met I found him skilfully scooting his bike on to the Kirkwall ferry for a short teaching spell there before heading  back to Stronsay. The other card he gives me is for the Stronsay Fish Mart Hostel and Café  which he and his wife Evelyn have been running since April this year. 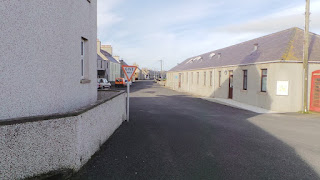 There are helpful younger family members also resident on Stronsay, two hours by the ferry out of Orkney's capital city, Kirkwall. Well it is if you happen to call in at the pier on Eday on the way.  Together this family team pulls together to make hostel and forty two seat café, a real hub for the island, population three hundred plus.  Evelyn's cakes are legendary and last Sunday's traditional roast lunch had an eager queue right out of the door.  Their all day breakfast also has its devotees.

Richard left Zimbabwe in 1986 and via South Africa arrived in Scotland, married Evelyn, herself from Stronsay and the rest is history. 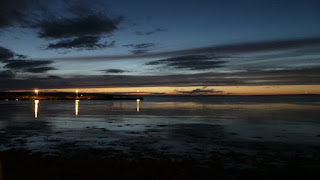 The twice refurbished, Fish Mart is pristine and in a central position next to the ferry point and opposite the pub.  Good luck to both of them as they put their mark on this most enviably located of small hostels.

At last I managed a visit to Roy at The Poor House  on the eastern fringes of Tongue in Sutherland.  Here Roy and Isobel Slaughter have in the last five years successfully brought to life a unique building circa 1897 provided by the Duke and Duchess of Sutherland, not the same generation as they who promoted the Clearances,  as a refuge for the destitute of that part of their Sutherland Estates.  Records say that four men and four women were accommodated. 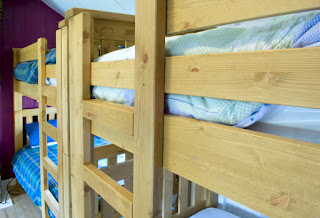 So, Roy and Isabel are down on numbers.  Seriously, they offer a single six bed room with sturdy wooden bunks, each garnished with a hot water bottle hanging on a hook.  The pine clad 'snug' and pristine bathroom and kitchen make for a cosy stay.  I bet the water bottles are used although currently the hostel closes from 10th October, reopening on 1st April.  What else does Roy do?  For years he was a professional photographer specialising in portraits.  Now, with a second wind his landscape photography leaves me green with envy.  Why can't I have that judgement, eye and outright skill?  Even if I had his camera, I could do no better than I do currently.  I reckon to have taken only five decent photographs in my life, already quite long, so it's a bit late for me to catch up. 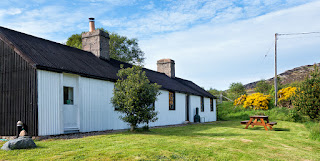 Roy's work is everywhere in the hostel adding an informative as well as an aesthetic touch.

It was Roy who enlightened me about the road route recently christened as The North Coast 500.  Shame on me for never having heard of this designated term for it.  And yet each of the sections I know well and have travelled several times.  Snaking north west from Inverness the route covers miles and miles of first gentle then raw landscape particularly in the rocky far north west.  In Caithness, approaching Thurso and then John O' Groats you are on the edge of the haunting Flow Country before edging south hugging the East coast of which author Neil Gunn wrote so passionately highlighting the rugged lifestyle forced on those who lived there by the infamous Highland Clearances. 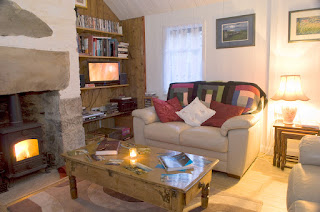 “At the same time, areas of the interior that had not already been cleared to make way for sheep were now being "improved". The most notorious clearances took place on the 1.5 million acre estates of the Countess of Sutherland and her husband, the Marquess of Stafford (later to become the Duke and Duchess of Sutherland), from which 15,000 people were cleared between 1811 and 1821. On one occasion a witness reported seeing 250 crofts on fire from a single vantage point, and in 1816 the Countess's factor, Patrick Sellar, was tried but acquitted on charges of arson and culpable homicide of the elderly Margaret MacKay.”

The descent to Dingwall and finally the trek across the Black Isle and on to Inverness completes the circuit.

In all I reckon there to be about eighteen highly individualistic independent hostels, all members of SIH, along this route which together with the five SYHA hostels gives great choice.  At a time when travellers in these parts are sometimes having to sleep in their cars as hotels and B&B's are either full or not there at all, hostellers seem pretty well provided for. 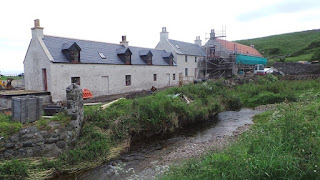 As I wrote in March last year, the folk in Portsoy, renowned for its Scottish Traditional Boat Festival are well on target for the completion of the conversion of the old rope works into a quite remarkable hostel. Warden Ian Tillett, he of downright practical experience, now manages both the caravan park and the bunkhouse.  Ian is likely to be looking for able help particularly with the bunkhouse and the package could be good for someone.  Good luck Portsoy Community Enterprise chairman Roger, Paul of the North East Scotland Preservation Trust and your dedicated community team for the launch this autumn.  Such a programme of sea centred courses and cultural experiences mingled with a welcome to individual travellers and groups will be a boon for the Banffshire coast.

It's all go in Portsoy for the new Back Green Bunkhouse

Now after a many times interrupted day of writing I can hear Volunteer Helper Caroline from New Zealand enthusiastically guiding this evening's arrivals at our own hostel.  The guests are neatly shown everything, ending up in the hostel itself.  As is often the case they are from all over and revisiting old haunts.  Welcoming them myself later I find myself in deep conversation with Luke from Australia and now in Toronto, Canada.  Luke managed a hostel in Skye for two years and has worked in several others.  In a short half hour I detect in him those special qualities of patience, in depth perspectives and innate understanding of how to best provide for hostellers and have them leave happy.   I have met a good man and you know what?  Luke has made my day.