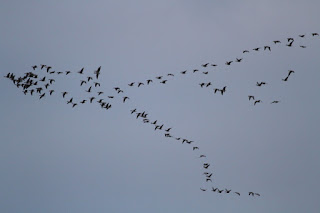 March is here, the days are drawing out and still skenes of greylag and pink footed geese fly well above us between the coast where they feed and the nearby loch where they overnight. “Welcome to Scotland” provides excellent information on greylag goose and pink footed goose

What caught my eye recently and which has been the subject of sometimes passionate conversation with those of our hostel guests who are connected by umbilical cord, it seems, to their binoculars is the report of research work at Uppsala University in Sweden that our birds can 'speak in phrases'.  Furthermore they can send out a 'scan the surroundings for danger' call followed by a 'come here' call.

And this is not all, for much as in the same way that astro physicists and their like are forever gathering yet more new knowledge about our universes, we are learning from animal and bird researchers that 'referential communication', formerly thought to be the preserve of humans, is more widely spread among other species.  They don't mean just those species who mimic or who are trained by man either.  So we know about parrots, bonobos and dolphins but what about chickens? Yes chickens use different 'language' to distinguish between aerial and ground predators. Read this article to find out more.

When collecting their eggs therefore I must rank as a ground predator unless that is, as I fondly imagine, I am seen as a harmless pal.  I often take hostelling children into the hens' field and to the hen hut itself.  There is something quite magical in collecting one's first warm egg. Remember?  Cautious fingers feel into the nest, under a hen even and small faces are wreathed in anxiety followed by triumph and delight.  This time of year we are seeing a surplus of eggs grow in the basket where folk are invited to help themselves for a contribution to the feed.

It was so relaxed and such fun when a family from Glasgow returned recently for their eighth hostel visit.  They do much the same things each year except that the nine year old who was in a papoose for her first time here is now into anything and everything to do with water, trees, swings, wood collecting, our dog and more.  This last weekend it was the turn of those quite serious veteran Edinburgh mountaineers who picked their weather just right.  So of course and at the same weekend did a fair proportion of Scotland's hill men and women.  The route into the most frequented corrie was busy and queuing at the foot of the ice climb a foregone conclusion.

When the meteorite burned up in skies just twenty miles to the north of us on 2nd March it was stunning.  The pair 'anniversarying' in the wood fired hot tub were struck dumb by the blinding light and a few seconds later a low persistent rumble of noise.


I was interested to see former First Minister, Alex Salmond's erudite explanation of just how near a catastrophic miss we in Scotland had just a bit later with 2013 TX68  Rather an embellishment perhaps of the more modest appraisals coming from seasoned scientists?  Maybe but then Alex now augments his MP's salary by writing for the Aberdeen Press & Journal and, fair play I suppose, it was  avuncularly convincing enough on U Tube.  Read more here>

This late winter's honeymooners seek out our hostel's more secluded spots, in the wood or by the water and now a spot in the field where they can oversee the lambing process almost upon us.  Our Soay sheep, originally from St Kilda are just unique in looking after themselves, including the lambing process, year after year.  Don't though try and herd them in the way we have watched the Scottish Blackface flocks on the admirable BBC 2's This Farming Life.   They splinter remember, not herd!

What a great programme to allow supper time at the main house kitchen table to take its time.  It stalls conversation of course and I wouldn't make a habit of it.  Talking time is too important a feature to our hostel team for it to be lost to television.  Friday evening's, pre supper 'noggin' together is the highlight and we clear the decks of the past week and look to the next in all its simple detail as well as its complexities.

We had a 'refugee' employed hostel keeper drop in last week.  She had given up in despair and reluctantly but with great relief taken leave of the hostel where for the past three months she had been put in charge.  Those very few hostel owners who buzz off abroad leaving unsuspecting, poorly inducted staff to carry the can just ought not to be in business.  The last straw for this lady came after a sickeningly drunken stag party of revellers had totally undone the half deep clean she had achieved in the week before they came.  They had not a thought, cared not a jot for her and the efforts she was making to see them well looked after.  To boot she was required to live in a single room in the centre of the havoc and share the kitchen.  Oh boy! What a misjudgement on the part of her inadequate employers.  That's not at all typical of a group hostel situation mercifully.  I know of hostels which positively welcome stags and hens, engage with the organisers in a positive and forthright way and provide for them admirably well whilst at the same time having the hostel's boundaries respected. It's not our scene but all strength to their arm.

I love the idea being promoted by Re Foresting Scotland to increase the nation's 'well-being' by reintroducing the concept of hutting. Read more here>

The movement is gathering strength and now with Scottish Government backing we may see, alongside and possibly integral with some of Scotland's independent hostels, a growing culture not unlike the enviable achievement over several generations to be found in the Scandinavian countries.  The concept sits easily with what a fair number of Scottish hostel keepers are attempting to achieve: diversity.

With a blackbird now singing to us each evening for two hours before the gloaming sets in, the glow of departing guests in the mornings each clearly wanting to tell us of how their two, three or more days in this oasis has inspired and reinforced them in their 'other and real world' we can feel good, yes, really good about having come to this stage in our own lives whereby we can give service as a way of life and most certainly not as a job.  Very soon Easter will be on us, a few small tents will arrive in May to add to buzz to these few acres and we will, alongside all other tasks, continue to fell, block, split and store the non-native lodge pole pine which feeds our six hungry wood burning stoves.  Then there is the hot tub and the scavenging we engage in to keep three chimineas gently reeking.

Bring on the Spring.