AT THE HOSTEL DOOR: in memory of Gerry Howkins 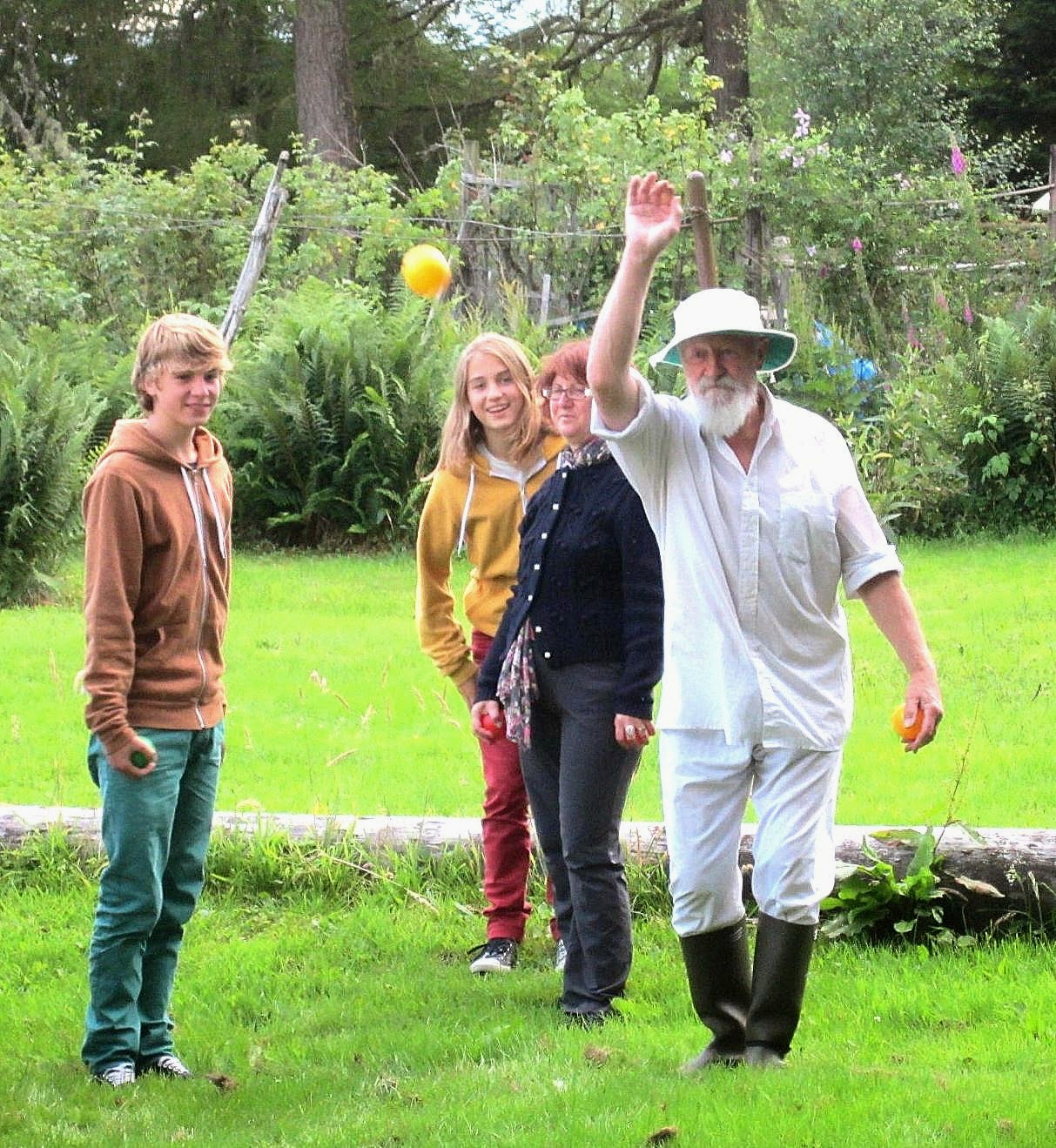 This week's news from Margaret at SIH that the legendary Gerry Howkins of Gerry's Hostel, Achnashellach has passed on will make hundreds and hundreds of folk who knew him or had met him at his hostel or in the pub reflect awhile.  Gerry epitomised the values he held on to and boisterously, convincingly waved in front of us all.  Others, I hope will write more intimate and well informed appreciations of Gerry and his half century as host and so much more.  I have stayed only fleetingly with him in Glen Carron twenty five years ago and spoken with him several times as a fellow hostel keeper.  My then teenage son and I were exploring in the hills above Craig and happily immersed ourselves in the evening craic around the fire. Gerry, certainly a not to be forgotten character and I sense I am the richer for having him cross my path.

In these columns back in March, 2013 I wrote of an incident that could well be Gerry to the tee.  Of course, it is Gerry and now seems the right time to appreciate the man and his values.

“Hostel Keepers or 'Hosteliers', I like that one, are a funny breed.  Many are ferociously independent, full of scary stories or even practices.  You may remember the legendary tale reported in the press at the time with incredulity where a single female hostel guest had arrived to find no hostel keeper but doors open and welcoming.  The open fireplace greeted her along with records and record player, bits and pieces of food and tell tale ex forces swaying and creaking two tier bunks.  I know this to be true because I too stayed there most happily many, many years ago.  It was a chilly October afternoon so she presumed to light the fire.  Enter later the Hostel Keeper with bucket of water which he throws on the growing  fire.  “There's no fires here until November at the earliest!”  His comment to the press ran something like, “ Weel I'm full every weekend; I must be doing something right !”

We could speculate:-  “  Is that right St. Peter, there's definitely no smokin' here?  Fine, I'm in.

That's very sad news.We have fond memories of Gerry - he was certainly a character. Dave & Lynda, Sail Mhor Croft Hostel Dundonnel.
I remember Gerry as a great stalwart of the independent hostel association.  He was one of a kind;a character whose like will not pass this way again. Gavin, Dun Flodigarry Hostel, Skye

Sad news indeed. I've never met Gerry, or stayed at his hostel, but his reputation as a pioneer of independent hostelling and a provider of accommodation with real character went well before him. We've had lots of people stay with us who had fantastic tales to tell of staying at Achnashellach. I didn't know that he opened Gerry's in 1964! And just look at what he started: the independent hostel scene in Scotland is thriving and the group he helped found has over 120 member hostels. Nice one Gerry. RIP. Andrew Donaldson Comrie Croft
I did not know Gerry, but my thoughts go out to the family. RIP Gerry.  yours aye Jock & Gwen Cousin, Balmaha House Bunkhouse


Very sad ! Stayed there once and had happy times Clive Siddal

Sad to hear about the news of Gerry Howkins from Gerry's Hostel. Although I did not know Gerry personally, I can see that this really is the end of a hostelling era.  Thoughts are with his family and friends
Best wishes Jayne, Smart City Hostels


Sorry to hear about Gerry. Please include my condolences should this be possible.Kind regards, Irene Drummond, Helmsdale Hostel

Sorry to hear the sad news. Gerry was a legend. David Nelson

We're very sad to note that Mr Gerry Howkins of Gerry's Hostel in Achnashellach passed away last Wednesday, 11th February. Gerry established the first independent hostel in Scotland and was a founding member of Scottish Independent Hostels, of which we're proud to be members.

Tales abound online about the character of the man, as well as the hostel itself which could be described as one for the purists and certainly distinct from the 'new breed' of hostels opening up nowadays. Founded in 1964, Gerry's was very much a walker's hostel and it's testament to Gerry's commitment to hostelling that it survived for over 50 years.
We hope that, like us, you'll pause for a moment to mark the passing of this hostelling pioneer. We particularly liked the following remark we found online, one of the many vivid recollections of guests-gone-by:
"There is no other hostel I've been to that has the same atmosphere as Gerry's on a wild winter night, with the superb fire & the ancient old records. Just don't take him down the pub to play pool & expect to win against "Gerry's Rules"."  George McConnachie, Coll Bunkhouse