At the Hostel Door 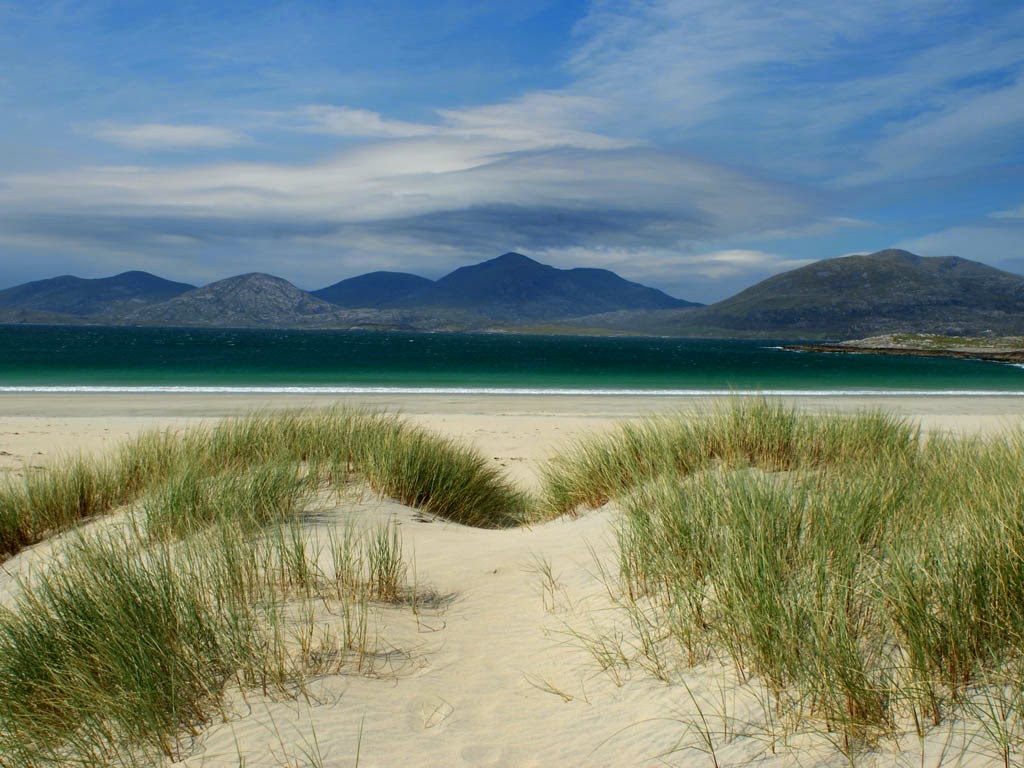 So what's so surprising about Harris and Lewis being voted the World's fifth most delightful to visit islands in the World?  Following close on that accolade are ones for Mull and Orkney.  Trip Advisor travellers gave the Outer Hebridean islands top slot in Europe in their 2014 Travellers' Awards announcement.  Given the competition both in Europe and World wide that is amazingly good news for the islands themselves and for the whole of Scotland too.

As I proposed to my first and only wife, in a sand dune on Harris's Luskentyre beach forty years ago this year I know well how enchanting and bewitching this landscape can be.  But it's not just the landscape is it.  In coming to their decision the travellers who reported back to Trip Advisor commented in glowing terms on just what effort the residents of all the islands had made to make them welcome and to tempt them back.  A lot has happened in those forty years to build on the innate and natural open-heartedness of the islanders.

Some years ago we visited, in one long tour, almost all the SIH member hostels in the Orkney Islands.  Isabell Harcus and her family at The Barn Hostel on Westray welcomed us into their farm kitchen where within an hour I had enjoyed the very best beginner's introduction to what it means to have lived and worked in these islands.  I learned so much.  What the Harcus family had created for curious visitors would certainly rank among the best anywhere.  Better than that though and despite some reservations I may have about the Trip Advisor system, the opinions of at least right minded travellers is so often formed by the experiences they have with us, the people behind the hostels.   Again, that is where Family Harcus scored.  No VisitScotland QA system to date can reflect that precious jewel.

We found similar hospitality signs at Sylvia Brown's Hostel,  'Brown's in Stromness where, as on Westray, Sylvia plied us with strong tea and plenty of enthusiastic banter about hostels and hostelling.  Rousay, St Margarets Hope, Ayres Rock all did the same for us and now in 2014 there are roughly double the number of SIH member hostels on the islands from which to choose.

Just off Mull is the Isle of Iona.  At the north end John at Lagandorain farms rare breed sheep and has a history in oriental rug restoration.  He is craftsman, farmer and host combined and of course he keeps a boat.  Formerly the working  home farm of the Macfadyan family – the amazing Jane still lives next door at Cnoc cul Phail, there is now a new build hostel right next to the original house and byres.  It is no secret that John easily attracts assistants to help him keep this most sought after of hostels in tip top condition and ever welcoming to guests throughout the four seasons.  Only when the weather is extreme does the ferry have to hide away in the Bull Hole on Mull and leave passengers stuck on one side or the other.  And that's not often.

But I'm forgetting myself.  In preparation for my big trip to Glasgow we walked today at a brisk pace around a loch at the foot of Cairngorm.  Way back in my somewhat scary working trips to Russia's Caucasus Regions I always took a long hike somewhere remote in our Highland hills a week or so before flying to Moscow and on to Vladikafkaz.  Fancifully I imagined that it was not beyond the bounds of possibility that at some point one warring faction or another in this turbulent part of the world, would take a dislike to me or to what I was doing there and bang me up.  At least, I reasoned, I could in my mind's eye replay again and again pretty exactly the latest hill route I had taken and that even without mobile phone, books or even paper and pen I might hold myself together until the faction holding me realised there was nothing of much worth to hold on to.

So in preparation for my Glasgow visit, I'm only joking, we walked round the loch on the clearest of days with the skiing on the slopes above us in full swing.  For much of the year so far there has been ample snow.  There has also been much strong wind.  Not today; it was pristine for everyone.  We ended up in my friend Toni Vastano''s Italian restaurant for a very late lunch where as chairman of the area's 'YES' campaign, Toni put before us his own reasoning for a 'green', collaborative and amicable divorce of Scotland from the UK.  Politics aside, the meeting up was the perfect end to our jaunt before returning to greet our own hostellers straight from the ski slopes of Cairngorm or The Lecht.

What takes me to Glasgow?  The SIH Spring Gathering of course though as now I am beginning to duck committees and conferences I felt I should lace the experience with a little culture.  That culture starts with two nights at Clyde Street's star spangled and popular Euro Hostel adjacent to what I see is called the Mint & Lime Bar.  I have hardly visited the city since the 'children' stumped up for us two tickets to a Tom Paxton concert and a very acceptable hotel room.  As for this visit's extra curricular treat it came down to a choice between Puccini's 'La Boheme' at the Glasgow Concert Halls or, wait for it, Miranda Hart at the SECC.  Somewhat abashed I must tell you that the irresistible Miranda won.  I have the ticket in front of me – level 2, door K, block 210, row F, seat 165.

If you are an SIH member, suggest you don't miss the Spring Gathering on March 17th.  If you hurry, you too might see Miranda.