A White-tailed Eagle Tale from the Isle of Lewis

One of our most far-flung members, indeed a Director of SIH, David Roberts from Galson Farm Hostel on the Isle of Lewis has been observing some unusual behaviour from a White-tailed Eagle (often referred to as Sea Eagles).  I would thoroughly recommend visiting David's website and reading the news/gossip tab which lays out in delightful detail the seasonal happenings on his farm. 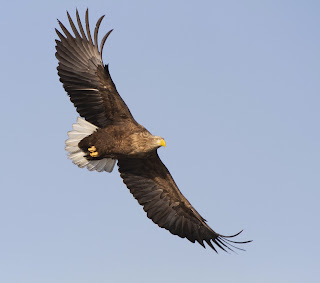 Recently we have been hearing a huge clamour from the ever increasing flocks of Greylag Geese. Rushing outside, it became clear the mayhem had spread miles along the coast, with several packs rising in abject panic. This was not a one-off since this recurred over several days.The cause of the pandemonium was a juvenile White-tailed Eagle. Having witnessed Golden Eagles overflying geese without reaction for many years, it would seem logical to suggest that the Sea Eagles are predating on the Greylags. Whilst l am aware they do take smaller geese on the lower Isles, these are a sight heftier a challenge, and l have yet to witness an actual kill..Is it possible that they have been taking young goslings and juveniles to date,hence the reaction? Will it transpire that as they acquire a taste,will harsher winter conditions force them into taking on fully grown adults? This would be  beneficial in controlling an ever increasing out of control Greylag Geese population with no existing predator,and maybe deflect damage away from lambs in spring, especially if this were to lag behind slightly,with hatching.
Posted by Scottish Independent Hostels at December 09, 2013